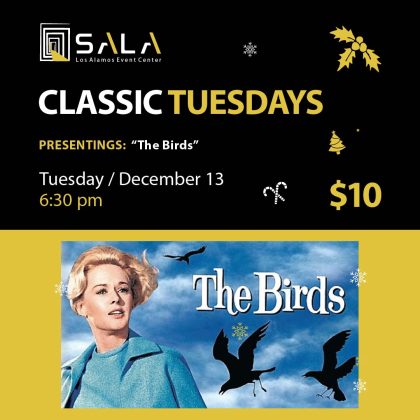 SALA is proud to present Classic Tuesdays where your favorite classic movies get a chance to be shown on the big screen again. This week we will be presenting you with The Birds.

The Birds is a 1963 American natural horror-thriller film produced and directed by Alfred Hitchcock. Loosely based on the 1952 short story of the same name by Daphne du Maurier, it focuses on a series of sudden and unexplained violent bird attacks on the people of Bodega Bay, California, over the course of a few days.

The film stars Rod Taylor and Tippi Hedren in her screen debut, alongside Jessica Tandy, Suzanne Pleshette, and Veronica Cartwright. The screenplay is by Evan Hunter, who was told by Hitchcock to develop new characters and a more elaborate plot while keeping du Maurier’s title and concept of unexplained bird attacks.

At the 36th Academy Awards, Ub Iwerks was nominated for Best Special Effects for his work on the film. The award, however, went to the only other nominee, Emil Kosa Jr. for Cleopatra.

In 2016, The Birds was deemed “culturally, historically, or aesthetically significant” by the United States Library of Congress, and selected for preservation in its National Film Registry.

“A wealthy San Francisco socialite pursues a potential boyfriend to a small Northern California town that slowly takes a turn for the bizarre when birds of all kinds suddenly begin to attack people.”