Celebrating female sages and innovators, both ancient and modern.

Showcasing works of medieval feminists ahead of their time: Kassia, the only woman composer in the Byzantine liturgical canon, and Hildegard von Bingen, a patron saint of musicians. Celebrated sound artist Meredith Monk, MacArthur fellow, two-time Guggenheim fellow, and National Medal of Arts recipient, brings a selection of works that were recently released for choral performance, and (to our knowledge) have not been heard in New Mexico. Caminante, the Chorale’s 2022 commissioned bilingual work by award-winning composer Jocelyn Hagen enjoys its world premiere. We are also proud to feature another composition from our 2021 commissioned composer, Reena Esmail. Music by Moira Smiley, an in-demand American singer, and composer whose choral works are performed around the world, rounds out this powerful program. 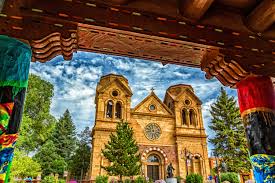