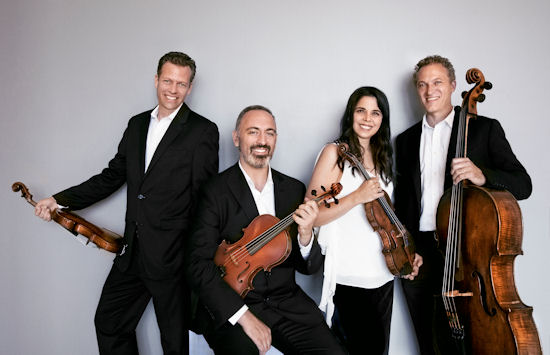 Recognized for its virtuosity, exuberant performance style, and often daring repertory choices, over the past twenty-six years the Pacifica Quartet has achieved international recognition as one of the finest chamber ensembles performing today. Named the quartet-in-residence at Indiana University’s Jacobs School of Music in March 2012, the Pacifica was previously the quartet-in-residence at the Metropolitan Museum of Art and has received multiple Grammy Awards for Best Chamber Music Performance. In 2017, the Pacifica Quartet was appointed to lead the Center for Advanced Quartet Studies at the Aspen Music Festival and School.

Formed in 1994, the Pacifica Quartet quickly won chamber music’s top competitions, including the 1998 Naumburg Chamber Music Award. In 2002 the ensemble was honored with Chamber Music America’s Cleveland Quartet Award and the appointment to Lincoln Center’s The Bowers Program (formerly CMS Two), and in 2006 was awarded a prestigious Avery Fisher Career Grant. With its powerful energy and captivating, cohesive sound, the Pacifica has established itself as the embodiment of the senior American quartet sound

In 2008 the Quartet released its Grammy Award-winning recording of Carter’s quartets Nos. 1 and 5 on the Naxos label; the 2009 release of quartets Nos. 2, 3, and 4 completed the two-CD set. Cedille Records released the group’s four-CD recording of the entire Shostakovich cycle, paired with other contemporary Soviet works, to rave reviews: “The playing is nothing short of phenomenal.” (Daily Telegraph, London) Other recent recording projects include Leo Ornstein’s rarely-heard piano quintet with Marc-André Hamelin with an accompanying tour, the Brahms piano quintet with the legendary pianist Menahem Pressler, and the Brahms and Mozart clarinet quintets with the New York Philharmonic’s principal clarinetist, Anthony McGill.

Sharon Isbin, guitar Acclaimed for her extraordinary lyricism, technique and versatility, multiple Grammy Award winner Sharon Isbin was named the 2020 Musical America Worldwide Instrumentalist of the Year, the first guitarist ever to receive the coveted honor in its 59-year award history. Soloist with over 200 orchestras, Isbin has performed in the world’s finest halls. Winner of the Toronto, Madrid and Munich ARD Competitions, Germany’s Echo Klassik and Guitar Player’s Best Classical Guitarist awards, she performed in Scorsese’s Oscar-winning The Departed, at Ground Zero for the first internationally televised 9/11 memorial, the White House by invitation of President Obama, and as the only classical artist in the 2010 Grammy Awards. The documentary Sharon Isbin: Troubadour, seen by millions on over 200 PBS stations across the U.S. and abroad, won the ASCAP Television Broadcast Award. Recent highlights include a commission for her by Carnegie Hall, a 21-city Guitar Passions tour with jazz greats Stanley Jordan and Romero Lubambo, sold-out concerts at the Kennedy Center, Kimmel Center, and her most recent Carnegie Hall appearances included collaborations with Sting and in recital with Isabel Leonard.

Author of the Classical Guitar Answer Book, Isbin has premiered over 80 works written for her by some of the world’s finest composers, and directs the guitar departments at the Aspen Music Festival and The Juilliard School, which she created in 1989.